South Africa’s grasslands covers one third of the country, and are home to an extraordinary range of biodiversity. With more than twenty years of involvement in various aspects of plant conservation, Isabel Johnson is in charge of the Botanical Society’s grassland biodiversity stewardship in KwaZulu-Natal. Isabel Johnson was interviewed by Zoë Poulsen. All photos by Isabel Johnson. 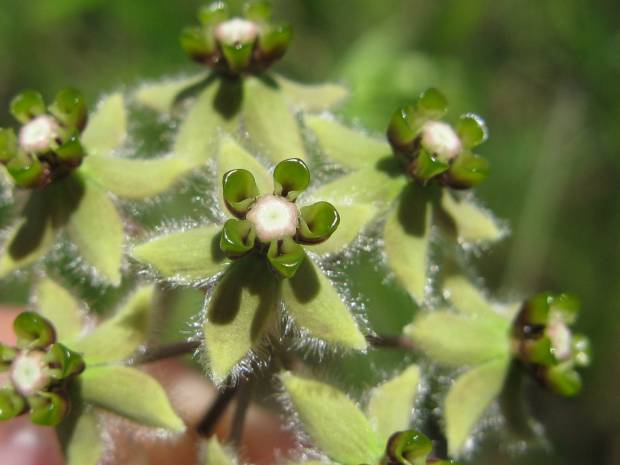 What is your background?

I did a degree in Botany, followed by a Masters studying estuarine phytoplankton in the St Lucia estuary. While living on a farm in the KZN midlands I began working on grassland rehabilitation, and then began working with threatened plants when I joined SANBI as a horticulturist. During this time I started the KZN CREW with the Threatened Species Programme in 2007, and then moved on from monitoring threatened plants to protecting them by implementing biodiversity stewardship in KZN for the Botanical Society through a CEPF (Critical Ecosystem’s Partnership Fund). 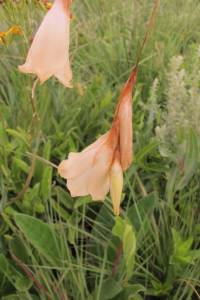 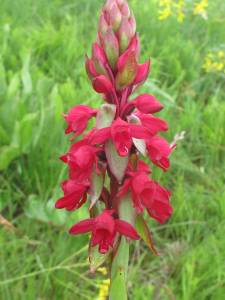 From an early age as my mother was a very keen gardener. I became passionate about grasslands about 20 years ago and still am.

What is your favourite plant and why?

This is a really difficult question to answer as I have so many that I don’t know where to start. But I have to choose the Hilton daisy (Gerbera aurantiaca), a very charismatic flagship species of our mist belt grasslands, but I also have a great fondness for the milkweeds (asclepiads).

What do you most enjoy about your work as a conservationist?

The satisfaction that an area formally declared as a nature reserve is relatively safe given the constant decline of our grasslands and seeing a land custodian realise that they have special plants on their property and then take pride in them is incredibly rewarding. I also enjoyed mentoring field rangers in botanical skills at a community owned stewardship site.

Why are South Africa’s grasslands important?

Grasslands cover a third of our country’s surface across the Eastern Cape, KZN and the central plateau. They are hugely important for our food security as a food source for domestic and wild herbivores, but also supply critical ecosystem services, such as water supply and flow regulation, carbon storage, erosion control, climate mitigation, pollination, and cultural services such as traditional medicinal and symbolic plants and building materials and eco-tourism. 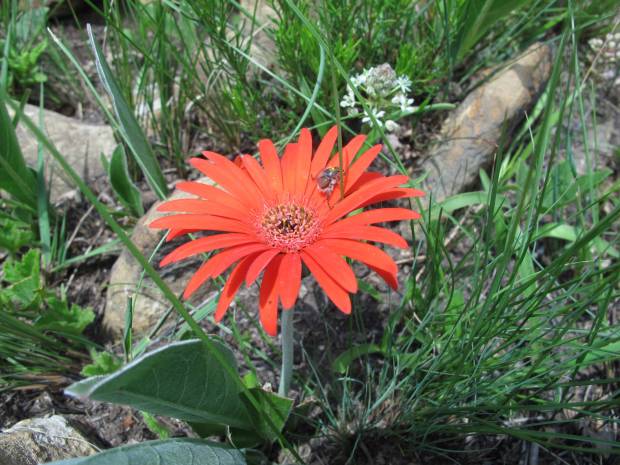 How do grassland ecosystems vary across South Africa?

There are also important patches of grassland that form a mosaic within other vegetation types such as the Indian Ocean coastal belt.

How are grassland ecosystems important in mitigating climate change?

Grasslands are vitally important as a carbon sink to mitigate increases in atmospheric CO2. With up to 90% of grassland biomass below ground, soil carbon levels are high in grasslands compared with other ecosystems.

Above: Asclepias woodii, a Near Threatened endemic in KwaZulu-Natal. Photo: Isabel Johnson.

We have over 350 000km2 of grasslands of which approximately 40% has been modified and less than 3% is under formal conservation. Importantly, there are over 540 threatened plant taxa in our grasslands. Our grasslands face a multitude of threats from modification (transformation for agriculture, commercial forestry and urban and industrial development), fragmentation, inappropriate grazing and fire regimes (too frequent or infrequent), erosion, alien and indigenous plant infestation and climate change. 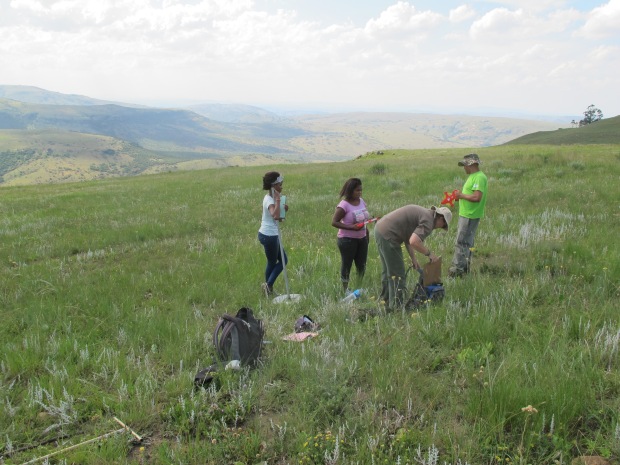 Currently the most important movement for increasing the formally protected areas of grassland is the Biodiversity Stewardship Programme (BDS) which also plays a critical role in ensuring good post-proclamation management practices by ongoing regular interactions with the custodians of these areas.

The conservation authorities play a role here particularly in protested areas like the Ukhahlamba Drakensberg Park and acting as watchdogs to prevent development in sensitive grassland areas.

The Department of Agriculture is also vitally important in ensuring grassland sustainability by encouraging appropriate management in terms of grazing and burning practices.

How can we improve ecosystem resilience in grasslands?

Anything which causes a loss of species diversity will affect the potential ability of grasslands to recover from accelerated climate events such as drought. Therefore improving management, especially of grazing, burning, erosion control and removal of invasive aliens is critical to maintaining grassland health. 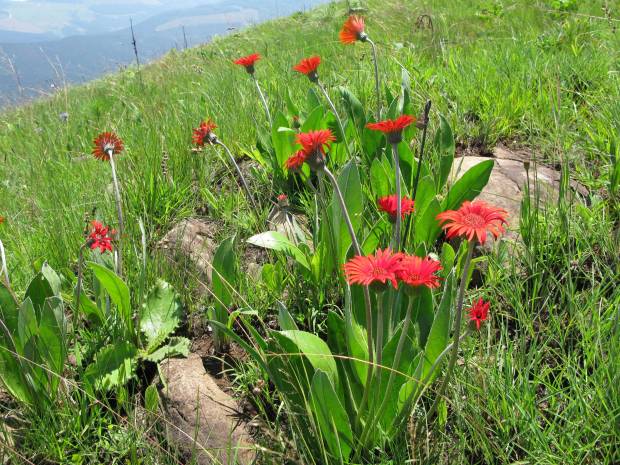 Biodiversity stewardship is an approach to entering into agreements with private and communal landowners to protect and manage land in biodiversity priority areas, led by conservation authorities in South Africa. It recognises landowners as the custodians of biodiversity on their land.

By implementing the protection of grasslands through formal legal proclamation, by educating grassland custodians on their importance, and by providing regular adaptive management advice on grazing, burning and invasive plant control.

As well as the conservation authorities, NGOs such as the Botanical Society, WWF, EWT, Birdlife and others currently play a key role in BDS. The KZN BDS programme works closely with the Department of Agriculture’s Natural Resource section to provide ongoing management advice for with grassland sustainability. 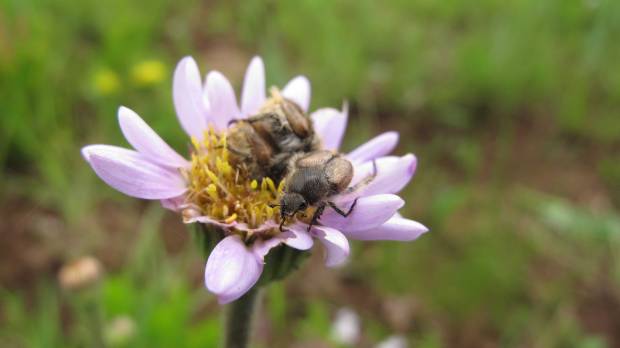 How is BotSoc involved in grassland conservation?

The Botanical Society is actively involved in grassland conservation through the Biodiversity Stewardship programme. It focuses specifically on the conservation of botanically important sites with high levels of threatened and endemic plant diversity, as well as endangered vegetation types such as Sandstone Sourveld and mist belt grasslands and has so far successfully proclaimed three nature reserves in KZN and is currently involved with a number of other sites under negotiation. BotSoc also provides valuable botanical input to the KZN BDS programme, assisting with the assessment of potential sites and, together with CREW, providing input on threatened plants.

Over the last several years BotSoc has been monitoring the relationship of grassland plant diversity to veld condition at a number of KZN BDS sites to investigate which grazing and burning regimes are most conducive to maintaining high forb diversity. Stewardship sites give us a unique opportunity for this since we know what management practices are being implemented.

The severe impact of both alien and indigenous problem plants in grasslands and in some of our BDS sites is a huge concern and we are involved in a research project with DARD on the control of Curry’s Post weed (Phymaspermum acerosum) at one of the BotSoc stewardship sites.

What does the future hold for your stewardship work in KZN’s grasslands?

2 thoughts on “Stewardship and Grasslands: An interview with Isabel Johnson”